A Sweet Golfing Victory For The Kiwi 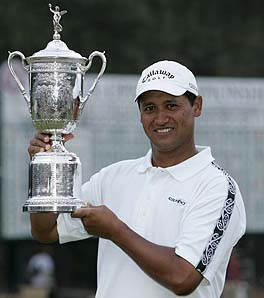 The US Open website says it all. I’m not a huge fan of golf, have played only once but I can appreciate the skill that’s required to be a good club player. What it must take to be good enough for the pro circuit is something else again.

Michael Campbell, from Titahi Bay in Wellington, has been playing pro for years – always at a high standard but never quite good enough to break through. In the greater scheme of things he must have been getting appearance money because the lifestyle is expensive but what competitor is happy with “enough”? Nope, winning is what you need. And now he’s done it.

Michael Campbell, of New Zealand, who had not survived the weekend in his last four U.S. Open appearances and owned no top-10s in a major since the 1995 British Open at St. Andrews, navigated his golf game beautifully through every treacherous nook and cranny of the 7,214-yard, par-70 Pinehurst No. 2 layout on Sunday. His brilliant 1-under 69 gave him a two-stroke victory over world No. 1 Tiger Woods, making him the first player from his country to secure the U.S. Open title. read the official story