It may be a little OCD of me but I get really annoyed when TradeMe users post items in completely the wrong category. Take these two… they’re in the iPhone 6s+ category for complete phones and not for accessories – and the screen protector is for a 4s, what a waste of time and effort?!

END_OF_DOCUMENT_TOKEN_TO_BE_REPLACED

I guess when you have the advertising budget that Woolworths (owner of Woolworths, Foodtown and…

END_OF_DOCUMENT_TOKEN_TO_BE_REPLACED

Today’s the day!!! The Web Developers Association of New Zealand is officially launched.

The NZ industry has had informal networking groups such as the PHPUG and Meetup.com organised gatherings but has no national identity. Something which is sorely needed.

Dennis Smith has taken the bull by the horns and started up the WDANZ. There are three levels of membership and it’s primarily aimed as a training and marketing tool for local developers.

I spoke with Dennis last month about

END_OF_DOCUMENT_TOKEN_TO_BE_REPLACED

In the article that follows Trevor Mallard is quoted as saying

Well it should be, but I have children at primary school and

END_OF_DOCUMENT_TOKEN_TO_BE_REPLACED

The Greens in New Zealand must be the most contrary political party of them all.

2 Elections ago they won huge support for their stand against Genetic Engineering and they painted a plausible picture of NZ as the clean food supply for the wealthy (and hopefully us, too).
After the election they were overruled by their coalition partner, Labour, and GE became legal. The practice doesn’t seem to have taken off but the door has swung open.

Since then the Greens, through long time activist Sue Bradford, has campaigned to see prostitution legalised and has a bill before parliament to outlaw smacking.

Now, by opposing these law changes I’m painted as monster who says that whores have no rights and beating children is ok.

And to add to my crimes against humanity I’m now going to drag babies from their convict mothers at the tender age of 6 months.

END_OF_DOCUMENT_TOKEN_TO_BE_REPLACED

Snap Happy with a Shoemoney Shirt

Some time ago Jeremy Schoemaker sent me some Shoemoney tShirts, they took a very long time to float across the Pacific Ocean, so long in fact that I thought he must have changed his mind đź™‚

So, imagine my surprise when they arrived. I got my Mother to take a photo with amazing Bream Bay as the backdrop but all I got was blue sky and clouds. Humpf.

END_OF_DOCUMENT_TOKEN_TO_BE_REPLACED

What Kiwis do with sheep 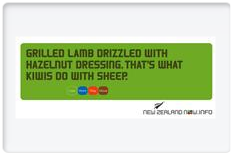 The Government have launched a new campaign that is aimed to bring Kiwis home.

These slogans (see above) are part of a $400,000 advertising campaign being launched by the Government in Australia today aimed at luring expat Kiwis home. [source: New Zealand Herald]

END_OF_DOCUMENT_TOKEN_TO_BE_REPLACED

It’s good to be a Rotten Apple

I tried out ecademy a few years ago and quickly tired of the networking tool. I guess I’m not their target market and I’ve never paid for one of their upgraded membership levels đź™‚

Every so often I get a contact message, out of courtesy I take a look but they are rarely interesting. Well I’ve started getting messages from S?ren Gorm Rasmussen flogging the ACN pyramid (or not) scheme which has hit New Zealand.