I help support an old application for a large multinational company. It’s having issues and we’re working hard to work out how to make it’s life easier. While reviewing some of the issues Windows might be having on the desktop we discovered that the standard install (aka “build”) had “Automatically search for network folders and printers” turned on.

This is a handy little utility that polls the network for new computers coming online, new printers, and any new folders that are created. It sounds really good, but when you think about it, 99% of the time you really don’t need it. In the meantime it’s exposing your login and password to any other users on the network – and who knows what listeners they may have deliberately, or inadvertantly, installed. 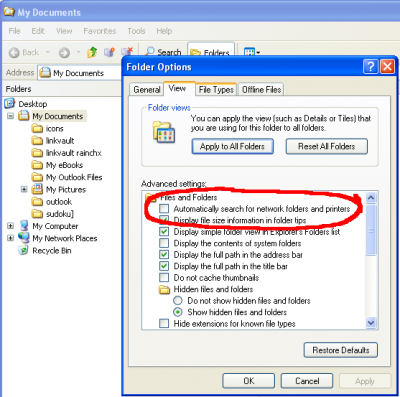 Companies like IBM automatically set this value off, and for the users we have that have turned it off there do seem to be some benefits. It’s not the be all and end all, but it has helped. Their applications don’t crash and their performance is enhanced.