I’ve just visited Money island which is being promoted heavily on TV at the moment. I’m interested in the whole field of finance education but that’ll be another posting 🙂

So, I visited and it’s a kid oriented kind of game. First thing is entering your name, cool. It’s all in flash so I can’t give links to individual games.

First, I went to Sty Wars where you have to move along a playing board and make choices about the bank you want to use. The first time I played I “bad bank choices” because I picked the bank with the highest interest rates – yet with savings I would have thought that the interest rates quoted were for deposits, not overdrafts. I got confused. The second time ’round I only ever had enough $ for one of the banks because of the minimum deposit criteria. Personally I’d pick a bank based on other factors and if it meant I had to keep a minimum deposit higher than my current savings I’d just wait and then open the account. 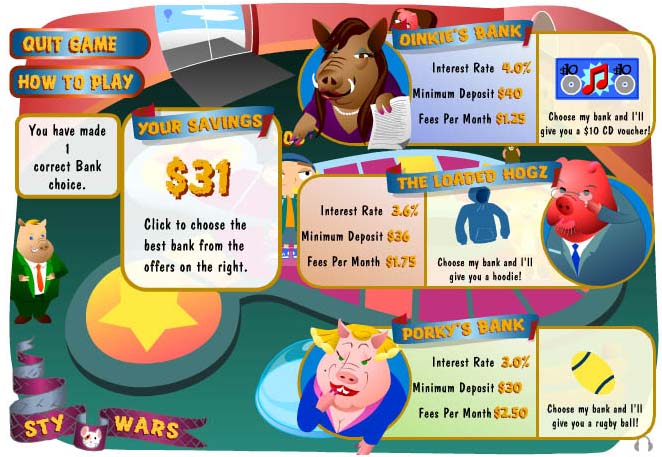 Next stop, loans at the Zeppelin but I couldn’t get the maths to work! 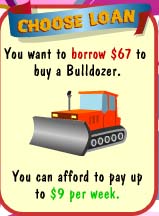 So, I can only afford to pay $9 a week, huh?
Well, working on simple maths and not getting too technical about it here were my options

What’s sad, is I didn’t want to be disappointed here, I wanted this to be a great educational tool for kids to learn about compound interest, saving etc. But I’m typing as I view so bear with me.

We’ve been given $10 pocket money but have gone to the movies with friends which cost $15 so now we’ve got a 5 overdraft. What!!! Surely, you don’t go to the movies if you don’t have the money. The movies aren’t what you go into overdraft for!

What made it funny was that once you were in this section, there was no easy way back to the rest of the game so you had to bomb out and lose the credit you’d got on the previous games.

Birthday Bash – well I got the hang of this but it was dull and not well explained.

Cash Register – this is good and it’s simple maths with plenty happening. Features our ill-fated 5c coins. A much longer game and the most fun so far.

Cash Dash – this is based on the same options as the Time Warp but with the player chooses to click the “risk or reward” button – but again rather than saying you have to stay home while your friends go to the movies it lets you go and puts you into overdraft.

School Trip Trek – this is good. You have vouchers and technically more than enough money but you have to forgo outings to the movies, and to pay for the window you broke playing cricket. I especially love the bit where catching the bus costs $5 – about right for Stagecoach. Even though I failed I still got the Star Trek beam me up scotty effect at the end – and I thought I made “good choices” 🙁

It’s a good tool but not one that I think kids will be asking to return to frequently.