Google gets upclose and personal

One of the key problems with the internet is the fact that you never get to really interact with the people whose services you are using. This might mean a company or person is misrepresented, either to their benefit or detriment. Chat rooms amplify the problem on a personal level but all “clicks only” present an image that may, or may not, represent reality.

Google is trying to overcome that problem within it’s own company with their Google Space initiative – a retail type stand at major UK airports. They’ve rightly noticed that at airports you have “dead time” with little to do. Shopping isn’t always a great idea but surfing, checking email and forums just might be.

And it gives the Google reps a chance to talk to the people. Now, I’m not so naive as to think that you’ll get real Google Insiders on the stands but you will have people who can talk the talk and possibly give you some facts, rather than the guesswork the rest of us rely on. 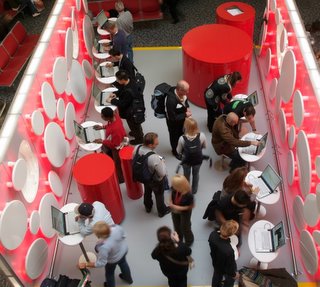