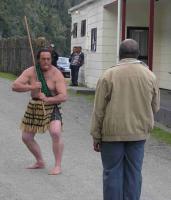 Anyone who knows me knows how much I hate smoking. Such an insidious habit, so seemingly innocuous yet, as Shane Bradbrook points out, it’s the number one killer of Maori. Then you have to wonder how much of the so called Obesity Epidemic if affected by the sedentary lifestyle associated with smoking.

So, it’s no great surprise that Shane & Co have decided to take a political approach to stopping smoking. Health hasn’t worked as a motivation, clearly, so lets stir up the colonising, oppression arguement and call it genocide. Check out his “Demonise the Baccy Barons” article below, click for a bigger, readable image.

The genocide arguement falls down when he writes…

But here’s a great quote from a tobacco industry executive when asked why he didn’t smoke himself: “We don’t smoke this shit, we reserve it for the dumb, the black, the ignorant and the poor.”

And then his detractors comically come up with such gems as

Maori have every right to enjoy smoking, gambling and eating fatty foods if they want to – and Maori health workers who say otherwise are just brainwashed “house niggers”.
…snip…
Instead of expecting Maori to stop smoking or start dieting and exercising, the Ministry of Health should instead provide Maori with pills to prevent illnesses like diabetes and heart disease, they advise. [source]

I don’t for a second think the goal of the Tobacco companies is genocide (profits, more like), but if it serves Shane’s purpose then go for it, mate, because we have a common goal – the demise of the baccy barons. 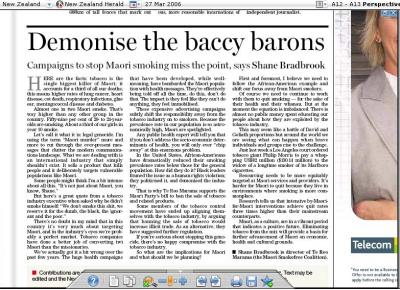